The entire Asia-Pacific region is noticing an increase in cyberattacks against e-commerce businesses in these days researchers have detected South Korean more than one million Payment Card Details have been offered for sale on the dark web since May 29.

During this month researcher noticed 230,000 records sold on the dark web, over the past two years, the researchers say this was increasing day by day, an irregular increase from the 42,000 seen in May 201 and the next month of 2019 more than eight-nine thousand recode sold on the dark web.

While the entire Asia Pacific (APAC) region is experiencing a noticeable uptick in attacks against brick-and-mortar and e-commerce businesses, South Korea has emerged as the largest victim of Card Present (CP) data theft by a wide margin.

Another observation from the researchers is that 3.8% of the compromised South Korean records were from US-issued cards.

One of the most affected US financial institutions was a credit union that primarily serves the US Air Force; the Air Force maintains multiple air bases in South Korea. Through an in-depth analysis of the compromised cards, analysts determined that many of them belong to US cardholders visiting South Korea “- Gemini Advisory“ 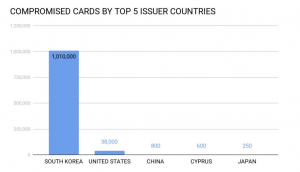 Researchers at Gemini Advisory monitoring card activities on the cybersecurity from and Gemini Advisory say which is significantly higher than the median price of South Korean CP records across the dark web overall, which is approximately $24 USD. The demand continued to grow while the supply continued stagnant until the recent inflorescence in South Korean records from June 2019.

The most traditional way to do this is by installing malware into a system that has point-of-sale (POS) devices on its network. In several occurrences of the attack vector was a remote desktop connection defended by omission or easy-to-guess password. and another method of obtaining CP record information involves using skimmers and overlays, devices that are installed at ATMs or POS terminals.