sony-playstation-hack After hacking social media accounts of HBO and its widely watched show Game of Thrones, a notorious group of hackers calling itself OurMine took control over the official Twitter and Facebook accounts for Sony’s PlayStation Network (PSN) on Sunday.

Sony became the latest entertainment company to suffer at the fingertips of hackers after their PlayStation social media channels were temporarily hacked on Sunday evening.
A group called OurMine claimed credit for the compromise that targeted the company’s Facebook and Twitter accounts.
Sony quickly regained control of the accounts but not before the hackers had posted a series of messages on the social media accounts.
After taking control of the PlayStation Twitter account, it tweeted to the 14.6 million followers of the account, encouraging the company to contact them via their website. This followed a tweet from three minutes earlier clarifying that they were not going to share any data and emphasizing that they were a security group.
playstation hack 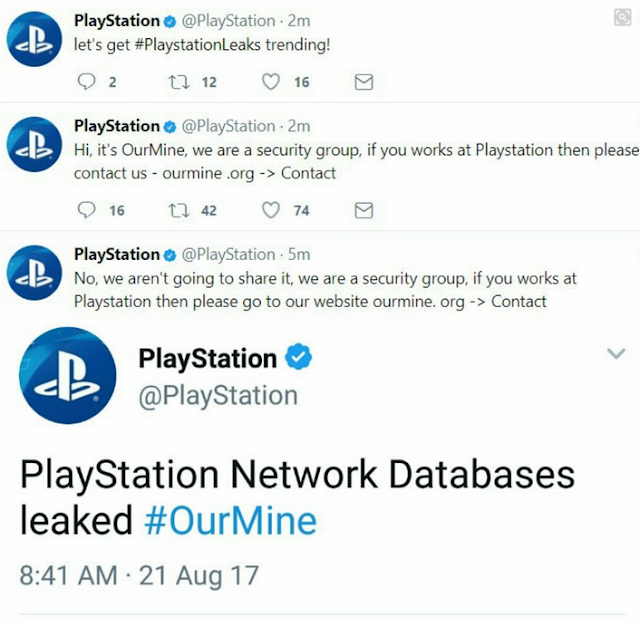 OurMine is a well-known Saudi Arabian security hacker group that have previously hacked other celebrity accounts. However, they claim to be an ethical hacking group and are only interested in helping the groups that they hack with claims that they only want to “show you all available vulnerabilities, and fix them all!”
The hacking group have labelled themselves as an “elite hacker group known for many hacks showing vulnerabilities in major systems,” on their website, along with a list of services/promises that they promote.
A hack on PlayStation is nothing new having previously suffered at the hands of hackers in 2011 when the PlayStation Network was attacked leaving millions of PS3 users unable to access the network for 23 days.
Xbox, the gaming industry’s other leader, has also suffered from the unwanted intrusion of hackers back in 2014 when its Xbox Support account was taken over for 45 minutes by the Syrian Electronic Army.
While the intentions behind the hack seem to be very much based on the promotion of the hacking group, it must be a major concern for both Sony and PlayStation alike, that private user information, including credit card details, may have been compromised.
Sony have yet to make an official statement regarding the hack but you would imagine it is only a matter of time before they address the issue.