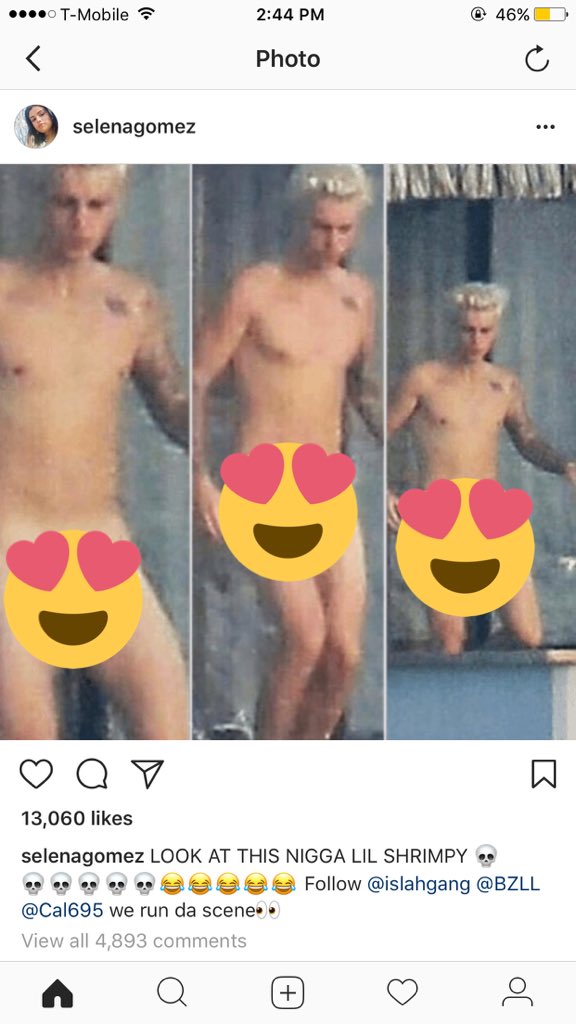 The highest followers account on Instagram owned by Selena Gomez has recently been hacked with unknown hackers posting a bunch of nude photographs of her ex-boyfriend Justin Bieber on her account.

The latest hack is not part of the ongoing Fappening events affecting a majority of celebrities by targeting their iCloud accounts, rather in the case of Selena, some hacker managed to breach her Instagram account and posted Bieber’s photos.
Bieber’s three full-frontal shots of naked photos were visible to Selena’s 125 million Instagram followers for a short duration of time, after which her account was swiftly taken down Monday night.
A post from Selena’s official Instagram account went up Monday showing 3 pics of Bieber with a caption that read:

Selena’s team has since re-secured her Instagram account, which was back online minutes after it was taken down, with the photos of Bieber deleted.


The Bieber nude images were not part of any stolen celebs photo dump, instead, they were clicked during his 2015 holiday in Bora Bora and also published online in 2015, when Bieber was dating model Jayde Pierce.
At that time, censored photos of Bieber were published by several websites, but uncensored versions also reached the Internet, which was posted on Selena’s hacked Instagram account, claims Variety.

There’s no detail about hackers or how they got into Selena’s Instagram account available at the moment, but as we have previously seen many celebrities tricking into handing over their account credentials in phishing emails, the same could be the case with the “Good For You” singer.
It seems like celebrities are not taking the security of their accounts seriously, which once again resulted in the hack of social media account of an A-listed celebrity.
Just last week, dozens of intimate photos of Anne Hathaway, Miley Cyrus, Kristen Stewart, Katharine McPhee, and golfer Tiger Woods reportedly surfaced on the Internet after unidentified hackers gained access to celebs’ iCloud accounts and stole their private photos and videos.
Today it’s Selena, but tomorrow it could be you. So, users are highly recommended to enable two-factor authentication on your accounts and always secure your accounts with a strong and different password.
Also, avoid clicking on any suspicious link or attachment you received via an email and providing your personal or financial information without verifying the source properly.