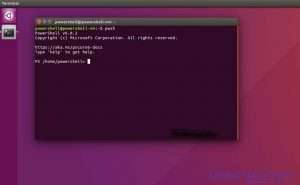 Microsoft has published its command-line shell and scripting language PowerShell for Linux OS as a Snap package, creating it effortless for Linux users to install Microsoft PowerShell on their computer.

This is not a jocking! Yes you hear me right

Microsoft has made PowerShell Core available to the Ubuntu Snap Store as a Snap application.

Microsoft community has also provided packages for some platforms, but they are not officially supported. which packages are identified as Community in blow the table.

PowerShell Core is to be the universal language for controlling your assets in the hybrid cloud. worked to many operating systems, architectures, and flavors of Linux, macOS, and Windows as possible.

Snap packages have a number of benefits over traditional Linux software packages (e.g. DEB or RPM):

How to Install PowerShell Core on Linux

first, need to install snapd and then run the following command.here  install process

You must update within six months after each new minor version release to continue receiving support.