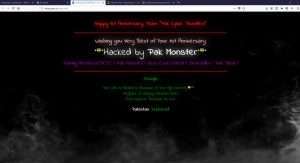 The website – farmer.gov.in – belongs to India’s farm department. Yesterday, the web portal was hacked late in the evening. The message read,

Wishing you Very Best of Your 1st Anniversary

Message
Your Site Is Hacked Is Because of Your High Security!

PayBack of Hacking Pakistani Sites
Free Kashmir, Because Its Our!
Pakistan Zindabad

The website was rendered inaccessible after a short period of time. The same portal was also hijacked last year in February and messages such as “Pakistan Zindabad” and “we are team Pak cyber attacker” were posted on it.

india farm   administrative revenue service of Central Civil Services of Government of India. The website acts as an official communicator for work between the Central Board of Direct Taxes (CBDT) and the IT department’s field offices in the country. It was reported that the technical team of IRS was working with Computer Emergency Response Team of India (CERT-In).

The officials said that a security audit will be undertaken of the website to ensure that no sensitive or secret information was uploaded on the universal resource locator (URL) of the IRS community working in the IT department. The website is still not accessible, we’ve checked. The following message is being displayed