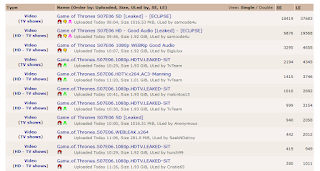 Episode 6 of Game of Thrones season 7 has leaked online on streaming, torrent, and file-sharing gates after HBO Spain accidentally broadcast the episode via its on-demand streaming platform.

Late last month, the hackers claimed that they stole 1.5 terabytes of data from HBO. A full episode of “Ballers” and “Room 104” have been leaked online as well as a script that’s allegedly for the next episode of Game of Thrones.
After that, the criminals published a half-gigabyte sample of its stolen HBO data, including emails, employment contracts, and financial balance sheets, along with the script of the upcoming episode of Game of Thrones, asking for a ransom—about $6 Million to be paid in Bitcoins.
The episode 6 “Death is the Enemy” was scheduled to air on Sunday, August 20 at 9 p.m. on HBO. The episode is next to last in season 7.

According to HBO:
“We have learned that the upcoming episode of Game of Thrones was accidentally posted for a brief time on the HBO Nordic and HBO España platforms.”

“The error appears to have originated with a third-party vendor, and the episode was removed as soon as it was recognized. This is not connected to the recent cyber incident at HBO in the US.”